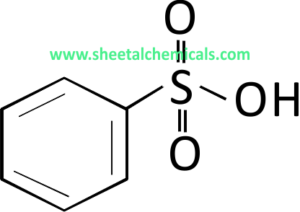 Benzene sulfonic acid is an organosulfur compound with the formula C6H5SO3H. It is the simplest aromatic sulfonic acid. It forms white deliquescent sheet crystals or a white waxy solid that is soluble in water and ethanol, slightly soluble in benzene and insoluble in nonpolar solvents like diethyl ether. It is often stored in the form of alkali metal salts. Its aqueous solution is strongly acidic. Benzene sulfonic acid is mainly consumed by conversion to other specialty chemicals. A variety of pharmaceutical drugs are prepared as benzene sulfonate salts. We are Benzene Sulfonic Acid Manufacturers in India.