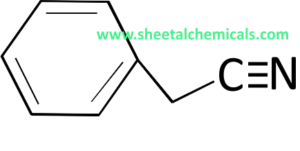 Benzyl cyanide (abbreviated BnCN) is an organic compound with the chemical formula C6H5CH2CN. This colourless oily aromatic liquid is an important precursor to numerous compounds in organic chemistry. Benzyl cyanide is used as a solvent and as a starting material in the synthesis of fungicides, fragrances (phenethyl alcohol), antibiotics, and other pharmaceuticals. The partial hydrolysis of benzyl cyanide results in 2-phenylacetamide, a known anticonvulsant. This is another chemical that is super important in the perfume industry. So all you people who want to produce excellent perfumes, this is the other chemical that you should be chasing after. We are Benzyl Cyanide Manufacturers in India.